The road to AdeptiCon. 4 days away! We will be driving out Tuesday afternoon. It is about 11 hours. Towards the end of the school day I will grab VV. She will miss school Wednesday - Friday. The drive at night will be easy for her and me. At some point she will pass out and I will get to listen to podcasts. And there will be no more pee breaks every couple of hours. Then we can sleep in Wednesday morning.

Saturday is the Net Epic event. 3 independent games. The TO went with 3 games instead of a tourney to hopefully increase attendance. Last year people were conflicted, had to chose Epic or something, and did not want to piss way one day with Epic.
I have shelved the Tau. My mates are sick of playing them. The Tau were the only army I had available while my stuff was in storage. Poor bastards faced Tau for 5+ years. Out of the 8ish armies available, I chose the Tyranids. They are rarely seen on the table. Mine have been in a box since I bought them. It may take all year to be able to effectively field them.

There are two rules I did not have a clue about (both on page 35) tunnelers and expendables. Tunnelers are basically a cheesy self planet fall. Expendables just don't add blast markers. 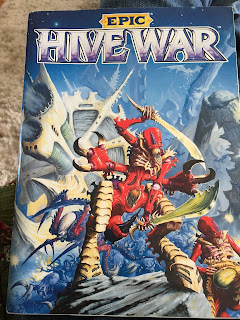 I know nothing about the Nids. Once or twice I have played against them. The only mini I can recognize is Genestealers. So what is one to do? I broke out the old school Nids book. Between the catalog in the back and HeavyMetal painting section, I was able to study what was what.

It appears two or three people independently designed the army. One third looks like sea creatures, another looks like the Space Hulk Genestealers, and the last bit a cheap combination of both.


In the collection is a fully painted army. I got it many years ago along with an IG Army. (Chris something or other sold off his collection) There seem to be a butt load of them. It is bigger than my Tau army. Hopefully there are enough. I am not buying more or repainting any of it. 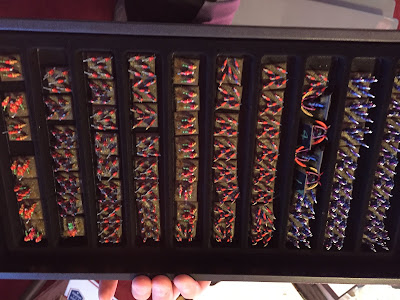 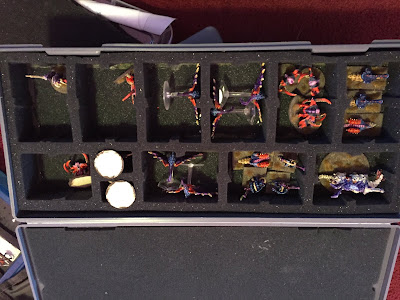 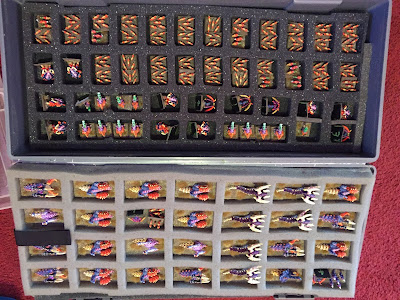 Now I need to count this mess and see what kind of list I can make.
Posted by Maashes at 12:40 PM