Finally. The last 9 Auxilia are finished. That completes 3 battle groups of  19 plus 7 command minis. Two spears to glue on. Here they are resting in the foam waiting to be shipped. 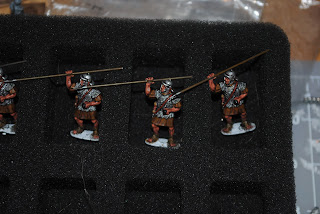 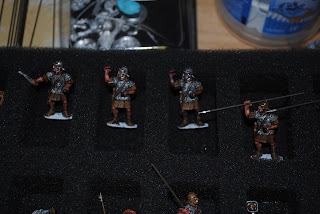 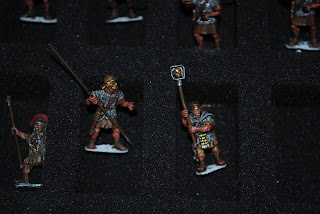 Posted by Maashes at 4:46 PM No comments:

Another game of Net EA. This time Pat and his wife popped by and my wife's mother was over. Freddie showed up also. In all my years of playing I never had no chics ask me nothing about any game. Both the girls were interested in how the game was played.
Julia only speaks Spanish, I don't, and all the rules are in English. She seemed to understand enough to get through an activation. Pat's wife did want to throw any dice, but seemed to show a lot of interest.

This is the first time we have fought solely over/in a city. I used model train railroad bed foam stuff for the roads. I did have enough FW roads. They are almost impossible to find. The buildings are mostly FW, JR, or Gamecraft. 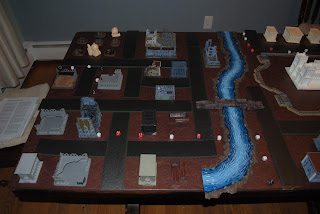 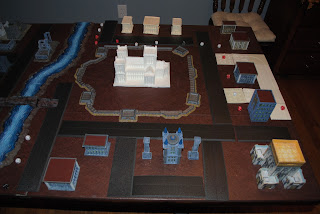 We played the Total War City fight scenario.  It can be found on TacCom here; http://www.taccmd.tacticalwargames.net/viewtopic.php?f=4&t=21344 Only change being the deployment zones. We choose the corner set up as my dining room table is too narrow. Looking back, 3000 point is way to big for that table. Also the river was a bad idea. It completely limited our tactical movement.
I deployed on the Church side. Freddie took the other with his Fists. I played BAs with the stormravens. Once again the stormravens failed to activate the first two turns. My death company failed every saving throw. That ensured Pat an easy win when Fred had to leave. 3 to 2. 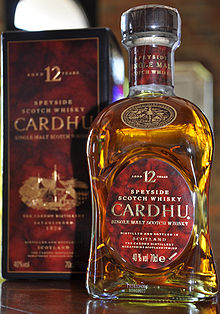 There are only 2 pictures. Both of the table set up before deployment. This is because we were smacking glasses early. One day we will get a proper battle report.

Cardhu is one of my all time favorites. There were years when I could not get any.  I had to bring back as much as I could carry from London. Once we moved to the Hudson Valley, I can't go any where without tripping over a bottle. 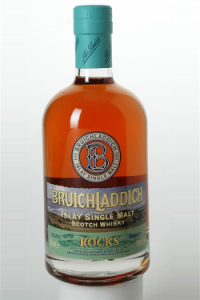 Pat carried over a bottle of Bruichladdich "Rock." Never heard of it before, nor seen it. It's not bad. I don't think I would ever buy a bottle.  The finish is very fruity. It's just not my kind of favor.
Posted by Maashes at 12:19 PM No comments: 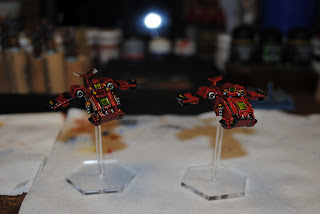 Progress. Highlighting weapons and engines. Plus I changed the shade of darker red. The 3rd in the detachment is coming along. I have been chipping away at these while my 28mm dry. 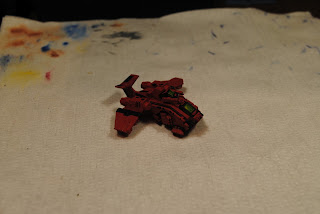 Also I finally got to prime up the last two detachments for the Space Wolves. These are the second run at them. The first where porked by humidity during priming. I tried to clean them, purple power, simple green, gas. Nothing would get the primer out of the smallest details. 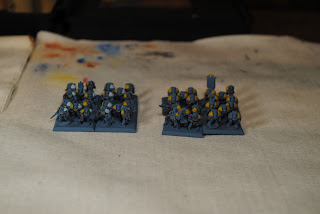 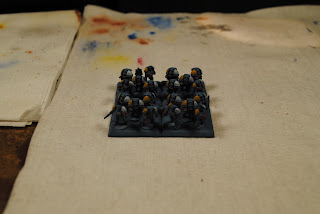 They are GW plastic, metal, and characters with customer SW termies from England.

Posted by Maashes at 8:34 AM No comments:

Our hot water was coming off the boiler. We use heating oil. Ha Ha Rugs. 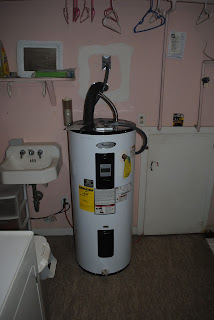 We now have electric hot water. I didn't have a an existing water heater. It was crazy easy to install. Even hacking my way thru the wallboard.
I cut out the oil boiler. Shark bites were used to cap it off. I did not have to run all new Cu. Only 5 feet, in the wall and down to an existing line. Then I covered all the hot water lines in foam. 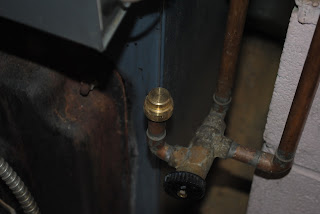 What saved me flat out is shark bites. They are the balls. You only need to cut out 17mm of an existing pipe and have a little flex. Shark bites are reusable. If you mess up they pop right back off. They cost a mint, but with the frequency water heaters fail and the fact I keep getting older shark bites are well worth it.
Posted by Maashes at 8:15 AM No comments: 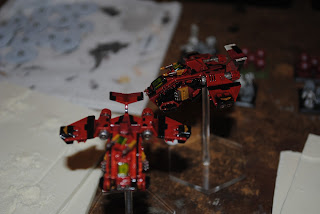 My A.D.D. is in full swing. I mount the Stormravens. Then started picking out the details. Just using a darker red was not bring out the fine details of the mini. I choose to go old school, back to the days of the BAs with yellow weapons and black panels.
I was having a bad chipping problem. All those square, sharp edges were getting chipped some how. So I polyurethane the mothers. I will have to spray a matte finish on them before I can continue.

Posted by Maashes at 6:58 AM No comments:

Canceled! I got stuck at work until 7:30. Only thing to do is drink scotch and block in some Auxilia. 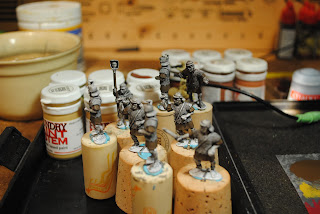 The wine corks and some progress

I always mount the dudes to old wine corks. The fake corks hold staples better. The natural cork starts to fall apart after the third use. Lucky me, Momma and friends drink the "two buck chuck." I get hand fulls of the fake corks every time I see her.
Each is held on with a chunk of blue tac and an industrial staple. They become easier to hold. Also I don't drop or knock them. With metal miniatures they do become top heavy. That's why the generals, characters always get a scotch cork with the wood piece on the bottom. Those below are BTD and are metal. To keep them up right when not in my hand they rest in a solo cup 3/4s full of BBs. 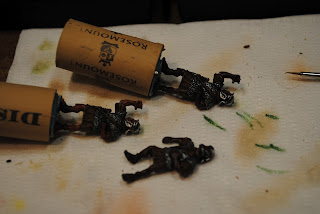 I finished 2 of the Auxilia and the wound marker dude for the final unit. I am happy with the way the brown tunic came out. The picture I took is crap. Bad lighting, or wife touched the camera, and I had not finished my first morning Dew. 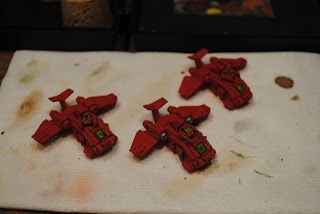 While chipping away at the last of the Auxilia my A.D.D. kicked in. I started to block in my BA Stormravens. I primed them with the army painted red. To give the red depth I hit them with a watered down P3 dark red. The cockpits were painted yellow and inked green. I like the idea of the night vision/electronics flooding the the cabin in that Mountain Dew colored light.


Also I primed up the last BTD Auxilia dudes. 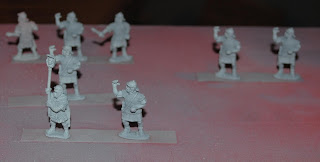 Posted by Maashes at 8:15 AM No comments:

Exactly, I never never learn. I am back to watching Netflix as I paint. Of course I spend more time watching than painting. I have been getting jack all nothing done. Its not like I am watching some cool. Just  crap TV seasons and they are crap.
That's it no more Netflix. I am going back to podcasts and tunes.
Posted by Maashes at 6:30 AM No comments:

Game night returns. It was Fred and me again. We got a very late start, 7pm. There are no pictures, as we were drinking without dinner in our bellies. We skipped the tourney objectives and had a slug fest over a central building. We ended in a drunken tie with our wives coming to drive us home.
The game was 3000 points a side. Fred played Imperial Fists. I got some Stormraven models about a year ago and they sat in the mountain. Until tonight and with Fred's OK, I played the Blood Angel's list version 2.12.
They look evil. I was worried that the 4 one shot plus 3 Bloodstrike missiles would be too powerful.  I did get off the all 12 Bloodstrikes at once. They crushed his Terminator detachment but did not break them. I will need a few more games to judge if they are under priced. Fred wisely never let them effect his battle plan.


I replaced one of my Tactical squads rhinos with 3 gun ships at 75 points each. My thinking was that 6 AP4s at 30 added to the 6 AP5s would make them a Detachment breaker. The mistake I made was taking them with a Tactical Detachment. As 6 Razorbacks are cheaper and give you the same danger close support.
I should have taken the Stormravens as transports for my Assault Detachment or as their own Detachment. The problem is once the Bloodstrikes are gone, they need to be danger close.
Blood Angels V2.12 is pretty solid. I never felt short of activations or unable to counter what Fred threw my way. I will continue to test drive the list over the month.

Posted by Maashes at 8:56 AM No comments: