Two more conquest Indians finished. No war paint for either one. I did a lazy man’s job with the bead work, the Indians had all over their belts and bags.  It will look good from arm’s length, but up close pretty crappy.  When you click one the pictures you will see.
The blue leggings surprised me. I love the way they turned out.

They both have that crazy hat again. The only reference in my collect was an Osprey book. The hat in itself shut me down. I am not a fan. I didn’t know what to do with it. It does not fit in with what is pictured in my mind. I could wrap my brain around it. The hat still seems out of place.
While at "Cold Wars," I picked up this bag of rocks. Yep I paid for rocks. I didn't even know what I was going to do with them. It is not like I don't have Bonsia rocks. The rocks were used on both Indians' bases. The snow was changed to have a melted look, spring skiing looking. 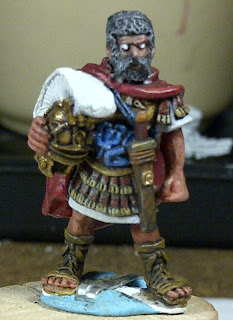 I have been bouncing in and out with an ancient commander. I have been reading "Tyrants of Syracusa," and some about Pyrrhus of Epirus. Only adding to my A.D.D.
He will end up a command character for my Sicilians. Old boy is giving me hell. I had painted over his eyes. Then porked them on the touch up. The hair and beard are being problematic. I just have a long way to go!
Posted by Maashes at 7:52 AM