I only got in another 3 games in. Kind of pissed the earliest game started at 9am. When the games started at 7 and 8am, I could play in 4. I plan my games weeks in advance. Once the PEL is out I start first by highlight rules systems. Next I look at time periods and for friends hosting games. I start with the latest game and work backwards. I don't get many games in during the rest of the year, so a binge.

I only got in another 3 games in. The 1st game was Tom Bookwalter’s themed game “The Mobile Guerrilla Force, the Black Box, and Bo Gritz.”  Tom used 20mm minis with FNG rule set to recreate the action. The GM went to extra lengths to represent the dense foliage.This game was a treat as, it was an actual engagement.  We even had a real life Army special forces Colonel, who operated in theater, to lead the US forces. The terrain and napalm blast were showing of a gamers love.
Tom used hidden unit markers until the VC were in spotting range. They added a lot of tension to the game and I got a huge kick out just moving them around. 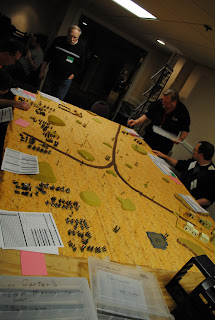 My 2nd  game was at 4pm. I had time to eat and troll the flea market. Bad idea. I added 41 28mm to the mountain. The game was remember the Alamo. US forces trying to relieve a garrison with a Mexican army closing fast.
The rules were a total pain in the ass. One references his army list, performs a some math, looks at a chart, references another chart, and finally rolls against a different chart. Crazy right, I still have zero idea how one determines cannon fire power. Now with that said it did represent unit engagements really well.
I did have a lot of fun. The Daves, father and son, same name were my direct opponents. The son was very aggressive and the father was a tough player. Bad dice plagued us. I got nothing done and then they turned on big Dave. Once that happened, I roll his flank and my cavalry were in the rear causing units to collapse left and right. 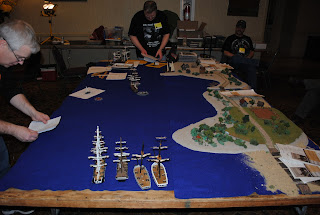 The 3rd game was 15mm Regimental Fire and Fury AWI. Another 8pm game with extremely fun group of player. One guy had corn moonshine, another brought some grog and all shared. After the moonshine I was off the sauce and in search of water. A great time was had! 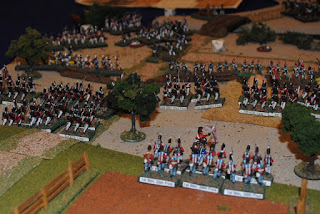 The British closing in on the hasty works across the road. 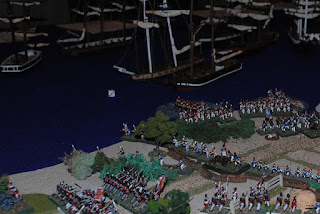 The marines trying hard to establish a beach head.

The road put up a stiff resistance. Wave after wave of Regulars beat them off the breastworks. Once the Brits penetrated their line, it was a mad rush across the bridge and back to town The Colonials and British Marines were in a slug fest for the beach. But with the Colonial road guard in retreat, they would soon have British regulars charging their rear. In the end we were past midnight. The town was theirs with the beach and bridge in British hands.
Posted by Maashes at 7:41 AM