It was a good night. Jimmy and Fred popped by. Also Jack the Marine was passing through and could make it. This was Jack was dive into Force on Force. After the first turn Jack was up to speed.

After 8 turns. We delayed the US forces, but the contractors walked right through untouched. The contractors got off the board and US forces secured an blew the crash site on the last turn. We prevented Jimmy from gaining control of the pilots and wounded two full fire teams. Only one KIA


We played a convention demo I ripped from the net. Sorry I don't know the origin. 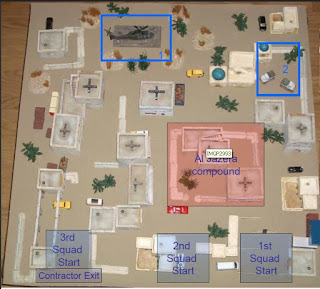 Hot Spots determined randomly by players. None can be placed within 3" of the board edge or within 8" of each other. Civilian Mobs are placed in the center of the board.

Any civilians injured in LOS to Al Jazera arms the civilians mobs and doubles the number of mobs. Civilians move away from gun fire. Civilians move every turn in direction of a spun beer bottle.  If shot through they divide and run in opposite directions.

Victory Conditions
•UN Contractors: Get VIP to exit point; exfiltrate on foot. 5 points for each VIP
•US Squads: Move to crash site, secure and evacuate survivors 5 points , secure or destroy sensitive items 5 points
•Bad Guys: Do not allow UN VIP to exit board. 10 points Kill or capture. Use crash survivors as bait to ambush US troopers. 5 For each KIA or capture, 1 for each wounded.
Posted by Maashes at 8:41 AM