That is until this Xmas. Dad got me a copy of Muskets and Tomahawks. A thin little thing. I read that bad boy that very morning while cooking dinner, throwing darts, and drinking. Yeah, yeah it looks like I put forth so much effort, but in reality the oven does 90% of the work. I just hide in the kitchen. Outstanding excuse to get away from the family and to NOT have to be washing up after the meal.
Dreaming of battles to come. I started thinking about what scale and the miniatures I would need. I thinking hard about 20mm or 15mm and trying to make them fit the ideas in my head. Mainly because the minis are cheap and paint up fast. But I miss the detail in 28mm, and F&IW is such a colorful period. Then me brain dried out, I remember those Indian collecting dust.
I got these dudes about 3 years ago at Fall In. I had no idea what I was going to do with them. They looked cool and I grew up in Iroquois territory. I think it was the owner there selling them. He was cool and chatty, very likable. It was not a hard sell. Old boy had to know when I stopped to look, that I had to have them. 5 packs/blisters went in my bag. I returned home and into the mountain they went.

Side note; F-ing Warlord! They came 10 to a pack for about a dollars a dude. I should have grabbed some more as Warlord Games wants 16 for 6.  Bastards!

I tore into two blister/packs, inspecting each one. Lots of repeats, boo. Each one pretty cool, good details, and a tight cast. I cleaned up the first set of six to be painted. I thought about sticking them to corks right away. A.D.D. kicked in and I started looking at basing options. 20 or 25mm squares didn't cut it.30mm rounds seemed cool but there would be a lot of time pissed away with basing. They ended up on 25mm GW rounds. 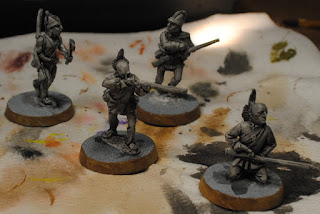 My wood is stored in the garage with a dehumidifier. Makes for very dry wood and a excellent place to prime in the winter. I coated them very lightly in P3 white from over 12 inches away. I did this twice, one high and one low angle. Next step was to cover them in Army Painter's dark tone ink. I do this to black line them and it helps to identify all the very small details. 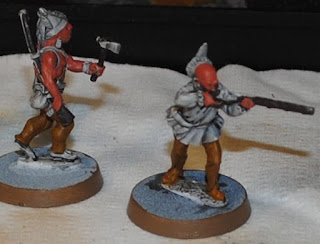 I am painting with 99% foundry colors. I used the Native American 3 paint skin tones. The first layer and cloths blocked in. 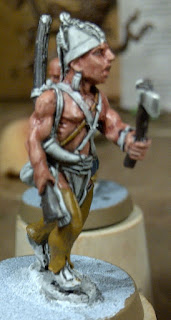 Both "B" and "C" skin tones layered on in this picture. Using the P3 wet palette has made life so much easier. During the process I found the "C" tone to be way too light. It gave them a look of almost 1980s childhood skin tone. The C highlight had to be watered down a lot. Also a P3 skin tone wash was applied.
Dad was called, maybe too late. Indians in art and the movie are all painted up. After I finally got him to hear my question, the answer was a huge relief. According to the all knowing expert the Indians would do whatever they liked whenever. On some party parties one individual would paint himself and the next time he would not. Dad also said they painted themselves so the great spirit would not recognize them performing such acts.
In the end I'm good. The next set will get war paint. 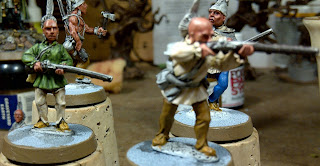 The last group shot. I had to put them on corks. My handling of them was causing rework. Both of these dudes have their skin completed. The leggings and shirts have been layered and highlighted. No ink washes.