Regimental Fire and Fury "GMing at a Con" part 1

I have never run RF&F at a Con. I have done other games and TO-ed a tourney. I will be running two games at Little Wars. I have hosted the game 3 times at my house. Both games will be the same scenario. In running the same scenario I can cut down on the amount of dudes, and terrain I have to drive out. 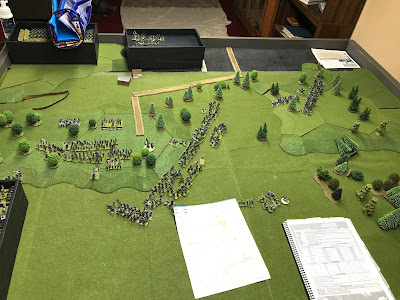 Originally I was going to bring my in house set up. The more I think about it, I want to do a foam table for it. I remember Bill running one of his 10mm RF&F games on a foam layout of Vicksburg. I think I should do the same. I have about a month to get the tools and source the materials. If it all fails, I can use the layout I have used in the hosted games.

All the minis, and markers/tokens done. All the labels are done. I need to restore the flags. Lastly pack them up in gem trays per brigades.

Then I was sourcing materials. All this shit has to fit in my car. That would be 3, 5 by 2 foot boards. Not a lot of room left. So I am going with a mat. Using an old drop cloth I had sprayed up as as table cover years ago, I draw out the battle map from the main rule book. 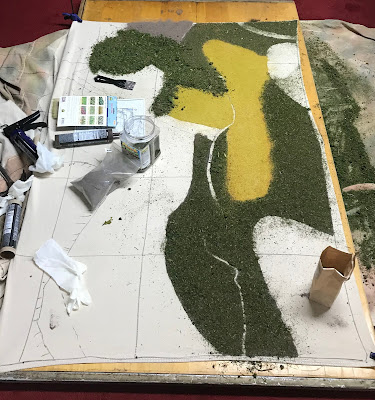 I used the DAP caulk from Lowies and flock I had sitting around. Which I then had to resource as there was no way I had enough flock. I did the flock order twice. I have used a butt ton of caulk. I bought 6 tubes originally. That turned into, what, 13 tubes total at 5ish a pop. I could have had the dam thing custom printed at this rate. 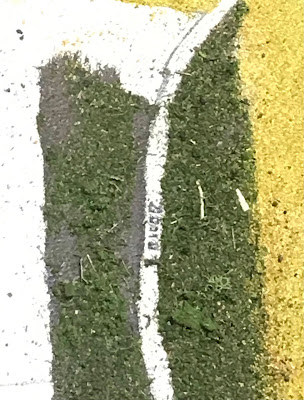 If you don't use a tube of caulk to assist in pressing the flock into the caulk, the above will happen. This will also occur if you go too thin with the caulk. It is easily fixed with the traditional method of white glue. White glue is also flexible when dry.

I was doing all this on the floor on one half of the tables's toppers. My gaming table was set for gaming. It was a terrible idea. My knees where killing me and shaking off the excess on to another cloth was a mess. I end up gaming on the dining room table and putting the toppers on my gaming table and moving it up there. That made life wicked easier. All the hills were cut from 1 inch insulation foam. I should have made the hills to slide under the matt. Instead they rest on top and its ok.
I had to get another 25 trees from the Wargaming Company. They arrived a little smashed. The kid did them for me.
I had to put in a lot of time to get close to finishing. Almost 3 days. The caulk takes longer than the stated 2 hours to dry. I was seriously worried I would not finish in time. This project was 5 times more expensive than I thought, 3 weekends more than I wanted to invest, and kind of extra messy. There is no way I would ever do this again! 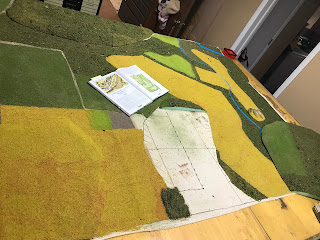 With the last hill done. Everything is loaded up and I am leaving in 3 hours for Chicago. 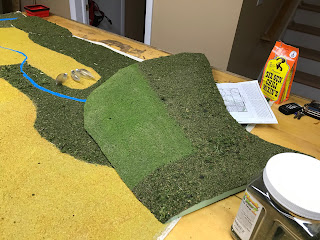