M&T has my attention for now. This is my first time back to painting 28mm since early last year. I am work on minis and terrain in bits and pieces. I want M&T to be a show case game. The colorful armies and personalities of the period I want to be reflected on the table top.

Long ago I purchased 6 sets of GW trees. I did jack all nothing with them. They are a little creepy looking and have really thick trunks. America's forest were primeval during the period. The trees were 15 feet thick. The trees are removable and come with a forest base. Why not use them for M&T?

I live in the Hudson Valley and hike the ADKs year around. In the first test forest base, I am trying to create the fall look. This area was much much colder then and that is the reason for the snow. 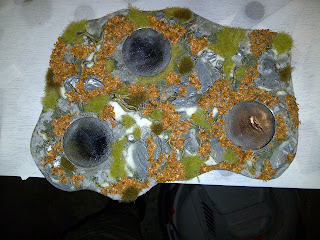 I sprayed the base with P3 black primer. The whole thing was dry brushed very heavily with craft store cheap dark brown. A lighter dry brushing of cream. Then the rocks and roots were picked out. The rocks were dry brushed with flat white. 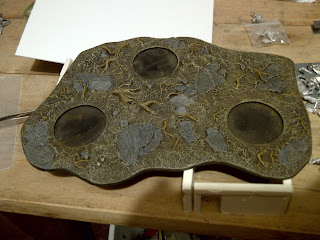 I started off using a terrain tack to attach everything. It is old or complete trash. Switching to good old standard wood glue made everything right again. I started off dropping tuffs randomly. Highland and some cheap sheet tuffs. The fall leaves were placed were I believe they would have collected naturally. Then the snow was put were the sun would not be directly hitting it through out the day. 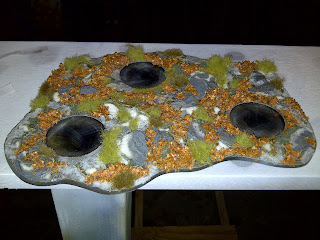 The trees are next.